Four years in the making, the Scott Plasma 6 is designed to be the fastest triathlon bike ever made. Here’s what makes it special.

The Plasma 6 has been a long time coming, but first impressions certainly suggest it’s been worth the wait. By eschewing UCI rules and considering real-world aerodynamics, cockpit adjustability and storage integration, Scott has created a superbike fit for both Kona glory and smashing age-group bests.

Athletes racing Ironman can take confidence from the fact that the Plasma 6 has been developed closely with 2014 Ironman World Champion Sebastian Kienle and double Olympic champ Alistair Brownlee.

The German star, in particular, was involved throughout the Plasma 6’s development process, providing testing and feedback to hone the bike specifically for triathlon.

“The Plasma 6 is made for the needs of triathletes with no compromises when it comes to nutrition or storage,” says Kienle. “Being able to stay on the aero bars during fuelling makes the system even faster. On top it‘s easier to travel with, it has a huge range of adjustment, it brakes far better and it‘s stiffer. In short, yes it is faster!”

The results of the Scott team’s hard work and Kienle’s insight showcase a design that’s familiar at first glance yet heightened with its own distinctive shaping and approach to aerodynamics and storage.

By removing the limitations of UCI compliance, Scott has opened the way for a more radical redesign of the brand’s flagship TT bike. Meanwhile a determination to take the moving rider into consideration when optimise airflow around the bike upped the complexity of the whole project.

The bike’s wheel positions are perhaps the biggest indication of the Plasma 6’s approach to real-world speed.

The area of the down tube around the front wheel is perhaps where the Plasma 6’s aero design deviates most obviously from the competition. While Scott is clear that the most aero position for the down tube would be directly behind the front tyre, in the real world, the smallest movements of the front wheel create a lot of drag-increasing turbulence.

That’s why after extensive testing Scott has gone to the other extreme, producing deep head tube that leaves a large gap between the rear of the front wheel and the down tube. The provides the fastest possible design outside of the wind tunnel.

At the back, where the wheel is locked in place, the frame’s seat tube flows air neatly onto the wheel’s rim, so getting the tyre as close as possible is beneficial. To help achieve this, Scott has provided six different mounting option to suit a wide array of wheel and tyre size choices.

A special mention must go to the fork, which is both wide and deep. It also features small farings to flow air cleanly over the disc-brake callipers – a new addition to the Plasma 6 which vastly improves braking performance.

Despite the UCI compliance of the Plasma 5’s frame, it was one of the first bikes to offer a triathlon-specific setup, achieved by integrating hydration and storage solutions needed for Ironman while also improving aerodynamics.

The Plasma 6 takes things to a new level with storage integration being a key consideration from day one of the design process.

Between the bars, there’s a nutrition system with plenty of space for fuelling long rides. The aerodynamically shaped box features a rubberised, slitted cover to make accessing your nutrition easy while the front is equipped with a Garmin computer mount so no additional hardware is required.

The chunky head tube that gives the front wheel plenty of room also provides the space for an internal drinks bottle, equipped with a long straw, that can be easily refilled on the fly. The antibacterial polypropylene bottle holds 575ml of fluid in sizes XS and S, while M to XL can hold 620ml. The seatpost also has a direct mounting system for either one or two extra bottles for longer races.

Vying with the head tube bottle as the bike’s most inconspicuous storage solution, there’s also a 400ml gel bottle stored above the bottom bracket which features a simple clip fixing system for security and easy removal when you need to get the energy in.

Scott’s components arm Syncros developed a completely new cockpit and saddle-positioning setup for the Plasma 6 that Scott says should enable 99.9% of riders to find their ideal riding position, which is as good news for bike fitters as it is for athletes.

At the front end, the base bars remain fixed level with the top tube but can be flipped so the bullhorns are higher for a more upright riding position when out of an aero tuck. Meanwhile, the pads and extensions have plenty of height adjustment via the central pillar and can also be angled from zero to 15 degrees in 2.5-degree increments. The pads also allow for fore-aft adjustment and can be set impressively wide too for riders seeking increased comfort around the shoulders and traps.

The cockpit can also be removed in one piece, making the bike easier to travel with.

At the back end, the saddle clamp can slide back and forth on the top of the long, T-shaped seatpost while you’ve also got the saddle’s rails themselves for even more adjustment. The Plasma 6 comes with the new Syncros Belcarra V1.0 Tri saddle, already raced by both Kienle and Brownlee.

The beam for the rear bottle carrier, which slots inside the head of the seatpost, can also be set to the perfect length depending on saddle setup.

Alistair Brownlee summed up his thoughts on the new bike after wind tunnel testing: “The integration of the hydration system, bottle and spares is a huge improvement. It’s more practical and more aerodynamic. It’s also considerably more adjustable than the Plasma 5 which means I could try new positions. All of this was evident, as I saved watts according to the wind tunnel data.”

The Plasma 6 is available in two complete builds as well as a frame-only option. All versions feature the top carbon layup HMX frame and come in frame sizes 49-58cm.

The frameset, which like the full builds is suitable for electronic-shifting only, comes complete with all the bikes aero accessories.

Related: Are Aero Wheelsets Worth The Money?

The PTO has announced 16 of its 20 wildcard picks for the PTO 2020 Championship, the $1m race to be held at Challenge Daytona this December.

The majority of triathletes rely on carbs for energy, but how are carbohydrates absorbed and why should you care about different types? 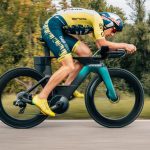 Four years in the making, the Scott Plasma 6 is designed to be the fastest triathlon bike ever made. Here's what makes it special.

The PTO has announced that 20 wildcard slots for the PTO 2020 Championship at Challenge Daytona will be awarded in the week of 12 October.