Active Root uses ginger extract and natural ingredients to create a sports drink that’s a little different – and one that could be ideal for triathlon.

At the heart of the Active Root formula is the gingerol contained in the drink’s ginger root extract. This unique ingredient is well-documented in the prevention and treatment of nausea, a benefit Active Root wants to extend to endurance athletes.

Refreshing flavour that doesn’t get sickly

Sugar as sole source of energy

Stuck together in tub after a while

Active Root has employed gingerol to help relax muscles in the gut, aiding emptying of the stomach contents into the small intestine as well as reducing bloating. For endurance athletes, the idea is that this means a more settled stomach, so you can increase your fuelling without feeling stick.

The use of the ingredient is based on findings from co-founder Huw Stradling’s peer reviewed study on the effect of ginger on exercise-induced gastrointestinal disturbances, which showed a decrease in the prevalence of stomach problems and nausea after exercise.

On the ingredient list, the brand is set on keeping things totally natural. Energy comes courtesy of cane sugar – giving a 1:1 ratio of glucose to fructose, which are both transported differently in the gut to allow increased absorption of carbs compared to a glucose or fructose-only drink. This gives 33g of carbs per 500ml serving and also makes for a GI index of 65 – medium on the grand scale – which means it should cause less of a spike in blood sugar levels than glucose- or maltodextrin-heavy mixes.

That said, it’s still sugar, so provides more of a quick energy fix requiring regular consumption rather than a sustained source of energy. The simple sugar could also be the cause of the storage issues we’ve had with Active Root, the granules sticking together in the tub after a couple of months, requiring a metal spoon to dig in and separate before measuring.

Sticking to natural ingredients, Active Root’s electrolytes come courtesy of 0.4g of sea salt per serving. This works out at 160mg of sodium – so you’ll likely need another source of electrolytes even if you’re a light sweater – and plenty more when racing in the heat.

When it comes to flavour, it won’t be a shock to hear that Active Root’s got a kick of ginger in the mouth. So, if you’re a fan of ginger beer and the slight sensation of heat at the back of the throat, you’ll be at home here. Unlike some other more processed and over-sweet sports drinks, Active Root’s flavour didn’t get old after a few hours in the saddle and didn’t put us off reaching for the bottle to take a swig.

If you’re not a big fan of ginger, you might be surprised by the taste of the brand’s other two flavours – Peppermint & Ginger and Green Tea & Ginger. Both of these really take the edge off the ginger. The Green Tea variety has the subtlest taste, the tea toning down both the ginger and the sweetness into a palatable earthiness.

Our favourite was certainly the Peppermint & Ginger flavour, which gives a cool hit to offset the ginger and stayed refreshing even after it had been in the bottle for a few hours on a warm day.

As for Active Root’s claims of reduced bloating and nausea, we’ve been tested the drink in varying conditions, durations and intensities and haven’t felt any negative effects.

One particularly nausea-prone tester, who’s also not much of a ginger fan, found it settled really well on the stomach – especially on the bike after swimming – reducing the post-washing-machine feelings to enable quicker refuelling.

If you’re looking for a carb-based energy drink that settles well on the stomach, isn’t overly sweet and is made from natural ingredients, you won’t go wrong with Active Root.

Find out more at: https://activeroot.co.uk/

This product was purchased by Triathlon Vibe for testing and review. 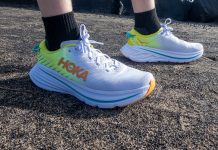 Hoka One One Bondi X Review