The Inside Tri Show podcast celebrates its first year on the digital airwaves but “This is just the start,” promises show host Helen Murray.

Undoubtedly one of the best triathlon podcasts out there, the weekly Inside Tri Show has now banked a year’s worth of episodes thanks to the hard work of the show’s host, Helen Murray – and her uncanny ability to get triathlon’s biggest names to open up like nowhere else.

While the Inside Tri Show might be in its infancy, Murray’s no stranger to podcasts or broadcasting in general, having co-hosted the Cup Of Tri/Oxygen Addict podcast for five years and worked for BBC Sport for a decade.

“I worked on location at two Olympic Games and interviewed a lot of sports stars in that time!” says Murray. “And if you can get beyond the clichéd questions and answers and listen carefully, then you can really start to work out what makes someone tick. And that’s what I try hard to do on the Inside Tri Show.”

It’s exactly this ability to get to the person behind the personality that makes Murray’s interviews so compelling. And indeed, she has courted some exceptional guests during the show’s first 12 months including four-time Ironman World Champion, Chrissie Wellington, current ITU World Champion Vincent Luis and the coach behind both female and male reigning Ironman champs, Dan Lorang.

But while triathlon certainly forms the heart of the show, Murray also intersperses other endurance sport characters and stories between chats with world champion triathletes, up-and-coming stars and coaches.

“Don’t get me wrong, I love speaking to the world’s best triathletes and coaches,” Murray says. “I mean, who knew Vincent Luis was so chatty and has an amazing Nike shoe collection? And the way Chrissie Wellington spoke candidly about why her career only lasted five years really blew me away.

“But as well as inspiring and entertaining listeners while they train or while they are out walking the dog, I also want to make them better athletes and coaches by having open conversations with a wide range of interviewees.

“So I try to vary my guests and not focus solely on world class triathletes, because there are so many amazing people in the endurance world we can all learn from. Some of them have some truly incredible stories to tell.”

Those stories include that of Afghanistan’s Olympic hopeful mountain biker, Farid Noori,  and British age-group triathlete Luke Grenfell-Shaw, who is currently riding a tandem from Bristol, UK, to Beijing, China while dealing with Stage IV cancer.

Murray, who also works part time as a Cancer and Exercise Rehabilitation Specialist for MOVE Charity, felt a particular connection to Grenfell-Shaw’s positive outlook on life.

“He lives by the words ‘Control how you live today’,” says Murray, “which has really helped me this year, in the midst of a global pandemic, to appreciate some of the small things that make me happy.”

Of course, it’s Murray’s passion for triathlon, which she also coaches, that never fails to come through loud and clear – whether recounting her latest (mis)adventures or just reflecting on the world of the sport.

“I’m out there swimming, biking and running just like everyone listening, so we have a lot in common. I also just like talking, so it’s the perfect combination!

“I genuinely love interacting with my listeners and getting them involved too! It’s like a secret little training club, through the medium of a podcast,” she says.

Indeed, Murray’s closeness with her audience is clear in the way she refers to the show’s patrons as coffee or vino buddies, without whom the show might not be where it is today.

“It’s been tough this year sponsorship-wise because of Covid-19, but I love doing the podcast and the support from my amazing patrons is very humbling.

“And when you get messages from listeners saying they’ve learnt something new or that they felt inspired by a particular guest, then you know it’s all worthwhile.  I just can’t wait for the next 12 months,” she said. 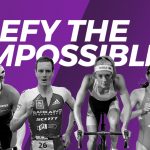 More Pho3nix Sub7 / Sub8 Pacing Details Revealed
Sub7 / Sub8 challengers will get 10 pacers plus Brownlee, Charles-Barclay, Blummenfelt and Spirig on their motivations for the attempt.

What Is The Collins Cup? All You Need To Know
The lowdown on the Collins Cup, the PTO’s flagship pro triathlon race featuring USA, Europe and Internationals teams doing battle for glory.